It’s a bright and crisp Tuesday afternoon. I’ve found my seat and stashed my suitcase. I’ve committed the rookie mistakes of forgetting both a nail file for the snick in my thumb nail and my yarn scissors (how?!), and while I’ve managed to fix both of those things thanks to other passengers who have clearly got their shit together more than I have, crocheting is no longer holding any appeal.

Even eating my lunch and browsing Facebook and Instagram only takes twenty minutes and I still have over two hours of train journey left to fill.

I pull out one of the four (!!) books I brought with me. This one has been on my To Read list since I bought it eighteen months ago when a client asked if I had it on my shelf. 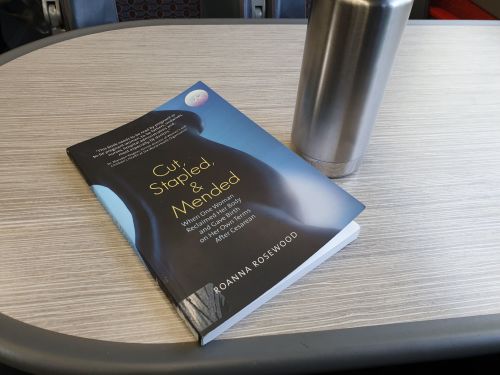 Cut, Stapled and Mended is a personal story of self-discovery, of transformation, of strength, and of homebirth after caesarean (HBAC). In that way that these things tend to happen, when you can see some of yourself in a story, it resonates stronger. HBAC is close to my heart; as a HBAC mum it always will be. I’ve been putting this off for that very reason. Things close to your heart can hurt you more. I’m not sure how this story will affect me, but, eighteen months after putting it on my shelf, I feel like I’m ready to find out.

I open to the first page and begin. Within thirty seconds I’m giggling.

"Co-sleeping, a term that flusters most Westerners. Elsewhere in the world, co-sleeping is common. Tactfully, people ask how we manage to get any sleep, but what they really want to know is if Ben and I still have sex."

Not too loudly, of course. The other passengers already think I’m a bit weird, having begged them for nail files and scissors, and then sneezed loud and hard enough to send myself into orbit. (Seriously, if you’ve ever seen me sneeze, you know what I’m talking about!)

The author, Roanna Rosewood, writes how I tell stories and I immediately like her.

Here is the beginning, except it’s not the beginning really, but it kind of is. Here is the real beginning, but if I start there and just go forward it’ll be long and dull, so I’ll fill in the pertinent details when they’re needed. Ohh, side tangent. It’s related, I promise. You need the context, otherwise the emphasis I place on this thing and these things makes no sense.

More than once, I’ve been (gently, and sometimes less so) told, "I’m just waiting for you to get to the point...", or some variation on that sentence.

Pregnancy particularly brings the internal storyteller out. How often are we stood at a bus stop and suddenly an old lady is telling us what happened during her birth fifty years ago? Or at a party at a friend’s house there are stories being recanted of that time someone’s neighbour had her baby on the side of the road, or someone’s missus was induced, or someone’s sister didn’t know she was pregnant until she went into labour.

I wrote my own birth stories, because I wanted to write them. I read copious stories from other people. I happened upon the term 'birth junkie' and proudly wore it as a badge. A birth junkie is (according to the upstanding and well renowned source, Urban Dictionary!) someone who can’t get enough of anything related to birth. It certainly seemed apt. I voraciously consumed information about birth, particularly about caesarean and VBAC birth, and the birth stories that were told. The homebirth.org stories? I’ve read all of them.

I prefer text to video, generally. I love the insight into internal feelings, thoughts, reasoning, intuition. To me, reading a long and in depth birth story is a perfect way to spend half an hour. I am less obsessive about it now, compared to how I was a decade ago. Age – or perhaps distance from my own births – has mellowed me. When I was planning my third birth, I found reassurance in the stories told by those who had gone before me; in their recounting of their fears, their hopes, their experiences in labour. Multiple times as a doula, I’ve had clients tell me that they find other people’s birth stories comforting.

I think it is summed up by this quote:

"There is more going on at a birth than just the physical."

Birth is a journey. Birth is transformative. At the end there is more than just one new being. You don't just give birth to a child; you give birth to yourself as well. You discover new things about yourself that you never knew before. Birth stories are, for me, a little glimpse into someone else's soul.

VBAC stories are especially poignant; the mists of previous caesarean make the whole landscape of pregnancy and birth foggy. The Uterine Rupture Monster lurks behind trees and around corners, accompanied by its friends, Failure To Progress and Foetal Distress. To triumph over these monsters can sometimes mean a much harder battle. To paraphrase Vince Lombardi: "your body can give birth, it’s your mind you have to convince".

Roanna weaves her story, which gives the reader glimpses into her childhood and early adult years. Her first two births and the feelings they evoke are heartwrenching. More than once I find myself with tears welling up. I’ve felt some of those feelings before. I’ve held space while clients have felt them, and I’ve recognised their footprints while clients pretend they don’t exist. Choosing numbness is not something unique to Roanna.

When the first part of my journey comes to an end, I reluctantly put the book away, only to pull it out again as soon as I’m on the tube. It’s a further 45 minutes from King’s Cross to the place where I’m staying overnight; I can fit a bit more in. I take it with me the next morning too, on the way to the training course I’ve booked onto. I realise though, that I’m running out of book rather rapidly, and I want to read the rest on the train home, so I put it away about half way there. I’m saving it, like the last piece of my favourite chocolate. Thankfully, for the trip back across London I am accompanied by a fellow doula, and we talk about the differences between the maternity systems in the UK and Singapore, where she lives.

I’m thankful because otherwise I’d have been sat, twiddling my thumbs in the effort to Not Read.

Like I said. Birth junkie! It’s hard to resist the urge to find your next hit.

The next day, Thursday, I run across King’s Cross in order to make my train on time and I’m glad to get settled into my seat. Time to finish the story.

Roanna continues her journey into herself as she prepares for her third birth. She starts to shed her skin, the things about herself that she dislikes.

In her final preparations, the days before her labour begins, she compares herself to an amaryllis bulb beginning to produce a flower stem. Later, after her birth, she brings the blooming flower into her bedroom. I feel a jolt, and quickly glance around at the 3 other passengers who are sharing the table with me. Did they feel that? Was it just me?

Amaryllis bulbs are my favourite flowers. I have nine, all different colours. I take so many photos of them I have a folder on my phone to keep the images separate. 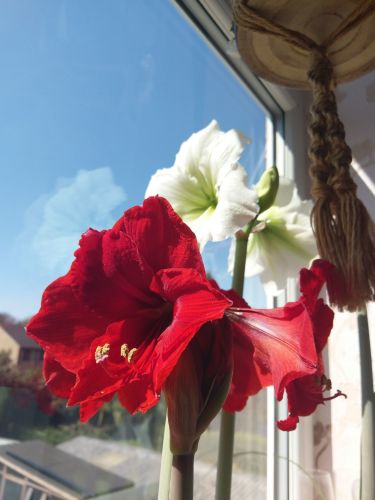 Each year I would watch and await the first sign of flowering – a tiny spike of green poking out of the bulb top. Once I’d seen one starting I would get impatient. It takes around eight weeks for the flower stem to develop, emerge and flower, but in that time the stems usually grow between eighteen inches and two feet tall. The smallest I’ve seen is four inches; the longest three feet! It always surprised me how interminable the first bit can seem, when the bud is slowly slowly easing its way out of the bulb where it formed, and then how fast it shoots up when it is finally ready to do so. The impatient me, now aware that something is rumbling, checked each day to see what progress has been made, despite knowing full well that it doesn’t matter whether I check or not; it will continue to grow either way. 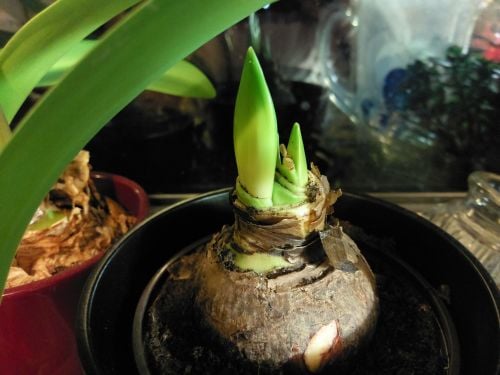 Nowadays though, I don’t check them, because I don’t chop the leaves off each year to force the flowers, so they flower whenever they fancy. I certainly used to – enjoying the stunning display they make when they all flower at the same time, in winter when most other things are mere twigs – but it didn’t feel right, so I stopped. Nowadays I don’t notice the beginning, because I’m not looking for it. I simply open my bedroom curtains one morning and suddenly realise there’s a foot tall flower stem poking out between all the leaves. I skip all the anxious waiting at the beginning, the wondering how long it will take and whether everything has developed properly, and simply feel the joy at seeing the plant do exactly what it is meant to do – bloom.

Sometimes I have one bulb that lags behind all the others. This year it was my Red Lion bulb. Their usual flowering period is between January and June. When one waits until right at the end of that time before flowering I start to wonder, 'maybe it’s not going to flower this year', and 'maybe something is wrong'. Yet there is always a bloom, in its own time, if I just wait long enough.

How have I never recognised the analogy before?!

Sitting there, surrounded by 3 strangers and their new kitten, it feels like the world has shifted slightly. Or maybe I have. A new layer has been discovered. Or perhaps a new lens has suddenly slotted into place.

I always say to my clients that every birth teaches me something new, or reminds me of something important that I had forgotten. I love it. If I ever stop learning things at births, I think it will be time to hang up my doula hat and move on to something else.

The book is finished. But the change in me from reading it is still happening. This is the impact of a powerful birth story; it acts as a catalyst for new changes inside the reader. And once again, I’ve learned something new about myself.

Forcing my plants to flower early feels wrong, and so does forcing birth before it’s ready. Nurturing a plant is a bit like nurturing parents during their pregnancy – provide the right environment for growth, try to solve any malnourishment or pest issues from the past, and they will flourish. Okay, perhaps the analogy is not perfect! But it's not bad.

And also, now I love my amaryllis even more. 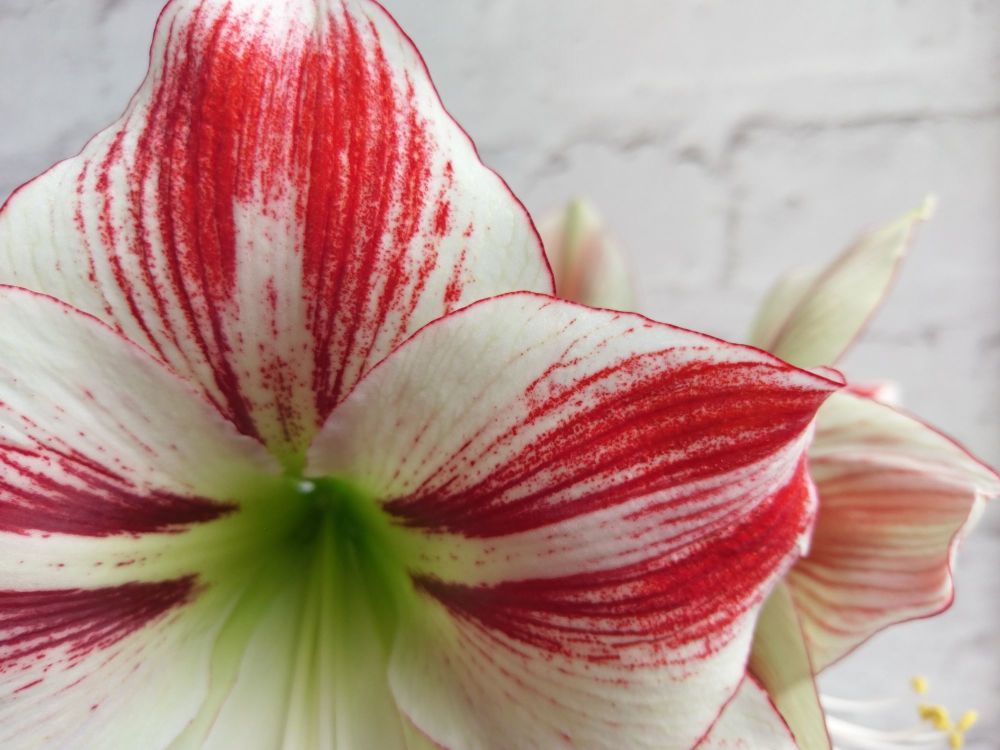