Here in the UK, there is a rarely questioned expectation that if a pregnancy is long, it will end in an induction. We are much more accepting of short pregnancies, generally speaking, than we are of long ones. 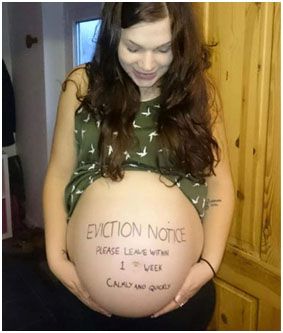 Calculating due dates – get your calendars out

A full term pregnancy is defined as being between 37 and 42 weeks gestation. However, the estimated due date given to expectant parents can vary depending on which method is used to calculate it. For example, here in the UK your midwife will take your LMP (last menstrual period) date and add 40 weeks (280 days), meaning the first two weeks of your pregnancy are before you’ve even ovulated. How accurate this date is obviously depends on when you ovulate – there can be some adjustment if you have particularly short or long cycles. Take a little trip across the Channel, though, and you’ll find a different method in France. There, they estimate the day you ovulated, and then add 9 months (39 weeks/273 days), giving you a date that could be a week to ten days later than the UK date.

There is also the use of ultrasonography to date a pregnancy. A dating scan is certainly more accurate than someone who doesn’t know when they ovulated, or has irregular cycles, or when there has early bleeding in pregnancy, but this study found that there was no difference between LMP date and early scan date when the LMP was considered to be reliable. Ultrasounds also have disadvantages. The possible margin of error is one; a week on either side of the date given if scanned between 10 and 13+6 weeks gestation, more if scanned later in pregnancy. There are questions about whether or not ultrasounds are safe for use during pregnancy. More importantly for a doula like me, who encourages people to get in touch with their instincts and work out what feels right, is the fact that ultrasounds undermine one’s knowledge of and confidence in one’s own body.

One of the main problems with trying to date a pregnancy is the fact that we don’t have an accurate way of determining when a pregnancy starts, because ovulation, conception and implantation are internal events. The best we can do is estimate ovulation based on physical symptoms (if there are any – there may not be, or one may not be aware of them) and then estimate conception (which generally occurs within 24 hours of ovulation). However, we can’t easily measure how long it takes for implantation to occur, and when pregnancies take longer to implant, they also take longer to gestate.

Even if we did have accurate ways of measuring all of those things, there are multiple factors that can affect the speed a pregnancy develops. There is a wide window of normal when it comes to gestation lengths. When I say wide, I mean over a month. This study found that that the average pregnancy length was 285 days after LMP (40+5), with a window of 37 days within which participants gave birth in. This study found that pregnancy lasted on average 284 days for first time full-term pregnancies and 282 for subsequent pregnancies.

Why does all this matter, you ask? Well, in my experience, most people put a lot of stock in their estimated due date, and see it as an expiration date. As soon as 40 weeks has passed the language changes to “she’s a couple of days late now”, even though she isn’t – she won’t be considered “late” until 42+1. While everyone knows objectively that less than 5% of babies arrive on their guess dates, there is still an ever darkening cloud of negativity over how long the pregnancy is lasting once it has passed 40 weeks (and sometimes even before!).

The current emphasis on a single date means is that by the time induction starts to be discussed as an option at 41+ weeks, the pregnancy already feels like it’s been unreasonably long. It should have been done with by now, right? This baby was due last week! Naughty baby! (I’m imagining a baby in the womb stroking a cat and cackling over a calendar while various people knock on the locked door in a progressively more irate manner... “Are you coming out yet?!” “No! Teehee, I’m messing up all their plans!”) 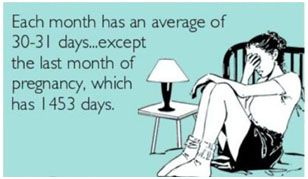 The end of pregnancy can be really hard – needing to pee all the time, feeling massive and unwieldy, being tired, finding it difficult to look after older children, heartburn... and that’s not even touching on things that can make it even harder, like pelvic girdle pain or sciatica. 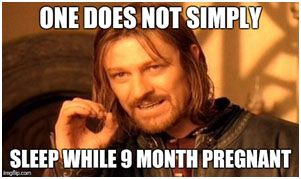 The focus on a specific date puts a lot of pressure on, when ideally one would be focusing on being as relaxed as possible. To give birth you need oxytocin, and oxytocin is a very shy hormone. It doesn’t respond well to pressure and stress. Anything that promotes adrenaline is the enemy of birth. Even without intending to, the use of an EDD introduces an air of expectation and anxiety, which acts directly against what is actually needed to give birth smoothly.

Sara Wickham’s posts here and here explore the concept of “fixed point expectation syndrome”, which you may like to read.

Add this to various comments (sometimes well meant, sometimes not!) from friends and family about when the baby is going to arrive, and discussions around induction (which may or may not be well phrased; we’ll get onto that later) and the end of pregnancy can be characterised by a sense of mounting pressure and, when things don’t start naturally, an intense feeling of failure.

That seems like an awful lot of unnecessary pressure, considering that different pregnancies develop at different rates depending on multiple factors, and that the average pregnancy is probably longer than 40 weeks anyway, and that the best we can do is make a rough guess about when a baby might be due.

Why are some pregnancies long?

The short answer to this is that we’re not completely sure.

The longer answer is that we know that genetics, hormones, maternal age, primiparity (first baby), the baby’s sex, socioeconomic factors and environmental stress during the third trimester can all play a part.

We also know that the baby’s development is important because the onset of labour is likely caused by changes in the baby’s lungs.

All these factors may coalesce and be more or less important in how long your pregnancy is, but we can’t narrow it down to one single factor that causes long pregnancies.

A more evidence-based approach to when you might give birth would be to have a window, and not give a specific date. While this is still not guaranteed to be the time when you give birth, what it would do is take the focus off one day as being The (Unlikely) Day.