My youngest daughter was standing in the hallway in front of the mirror, brushing her hair.

“Would you like me to help you put your hair up?” I asked her.

And then she did.

I knew this was coming. She’s recently had her hair cut to a length that she can manage easily. Before the cut, she was attempting to brush her hair herself, but reaching out for help (or accepting offered help) after struggling to work through the tangles. Her hair, once prone to matting into a snarly crow’s nest on the back of her head each night, now sits smooth and straight - a change that has come with age. I miss the curls she had as a toddler, but I know they’re gone for good, and I content myself with photos. I don’t miss combing out the crow’s nest. She doesn’t miss me combing it either! 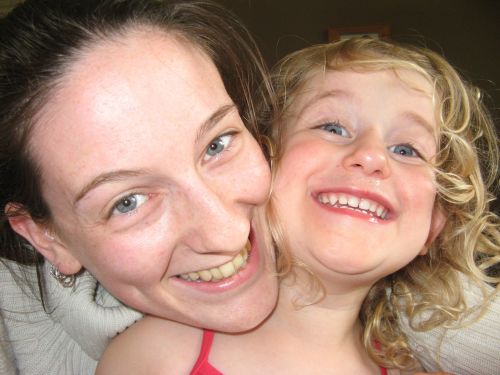 I knew this was coming. She’s not needed help dressing for years. Brushing her teeth is something she does by herself, although with supervision to make sure she doesn’t just spit the toothpaste straight back out again! We negotiated her showering by herself over the course of several years, firstly because showers are scary, then because washing one’s own hair is difficult, and then because washing hair is doable but rinsing conditioner can be a right ol’ phaff.

I knew this was coming. I’ve looked forward to my children growing as people, learning to exist in the world without my help. I’ve enjoyed seeing them flourish. Their initial steps - literal at first, and then metaphorical later - are wobbly. They falter, and lose confidence momentarily, and then somehow gain enough courage to try again. And again. And again. They gain strength, and suddenly the things that seemed like such a big deal are easily done, barely thought about, routine. They are travelling a path towards flying the nest - certainly figuratively, even if not literally - and I am so proud of them.

I knew this was coming.

I knew this was coming.

And yet... I couldn’t help the little flutter of my heart, a tiny jolt of shock and dismay. She doesn’t need me anymore (at least, in this aspect of her life).

I knew this was coming, but I wasn’t prepared.

I wasn’t prepared for being unprepared either. I realise that sounds convoluted. But if you know a feeling is coming, regardless of whether it’s positive or negative, you can prepare yourself somewhat for that feeling; especially if it’s one you’ve felt before. And I have felt like this before - when I stopped nursing, for example. It’s not exactly surprising that one can feel a little bit lost when a chapter of your life comes to an end. But I just wasn’t expecting it. Not for this.

Not over a ponytail.

Should I have expected it? I don’t know.

It’s not like I won’t have the opportunity to do her hair again. Twice yearly dance shows that require Proper Hairstyles like French plaits or buns mean I do, and will in the future, end up doing the girls’ hair on those occasions.

(Is only being able to do their hair when it’s a French plait a good thing? I’m not sure about that. I only learned to French plait in the last 2 years and it has not come easily. I’ve been shown how by a friend; I’ve watched youtube tutorials; I’ve put the girls through countless hours of ‘practice’. At the very least I now no longer cry with frustration when doing a French plait. That’s progress, right?!)

The regular daily stand-in-the-hallway-brush-the-hair-tie-it-up routine, though, no longer involves me. I’m left behind, an unneeded relic.

I know this is a good thing. This is part of parenting, and it’s a good part. We’re all raising our children to not need us anymore, to be self-sufficient, to go out into the world by themselves and be whomever they please. It's the whole point.

On the whole, I've been glad when these changes have happened. Parenting babies and toddlers is intense. Their needs are great and we give so much in such a short space of time. It can be isolating. It can be overwhelming. It's certainly exhausting. I enjoyed it, at the time, and now I'm enjoying the challenge of being needed in different ways; less physical and more emotional. I'm enjoying helping these young humans on their wobbly metaphorical legs figure out their place in the world.

But on this occasion, it’s unexpectedly bittersweet.

It seems I’m going to miss hair brushing more than I thought.